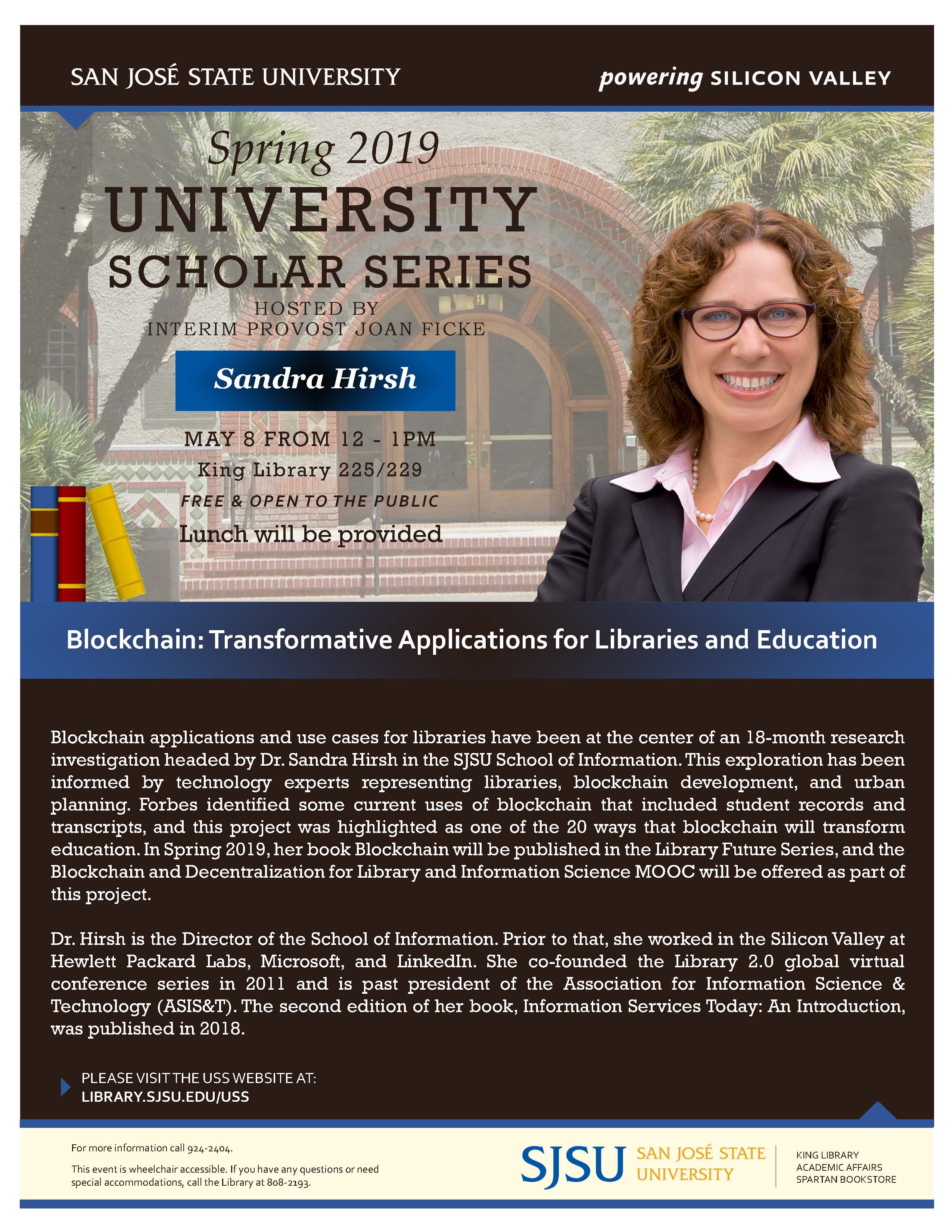 On 28-29 May 2019 (with pre-conference on 27th), this international conference taking place at university of Lille (France) will provide participants with a unique opportunity to have an independent, informed overview of the application of blockchain technologies in the global education context. The plenary sessions will include use case studies from the European Commission, governments institutions, researchers and private stakeholders. The call for papers in seven over-riding themes is open. Registration is open until 26th April 2019. http://blockchaineducationfrance.fr/

MOOC: Blockchain and Decentralization for the Information Industries

The content of this MOOC is publicly available, except for discussions and quizzes. Anyone can view the course (in read-only format) without logging in to the Canvas Network.

The Blockchain and Decentralization for the Information Industries MOOC will introduce the technologies behind Blockchain, outline guidelines for how and where Blockchain might be used within the information professions, discuss other related emerging systems, and generally make participants more capable of critically evaluating claims and services regarding Blockchain.

The Blockchain MOOC occurred from Monday, March 11, 2019 to Sunday, April 21, 2019. The six-week course covered topics, including:

Blockchain: The Path Forward for Libraries and the Information Professions

It is clear from the expanding literature that blockchain technology is a trend on the brink of revolutionizing the public and private sectors. There have been conferences, books, white papers, start-ups, and numerous back-channel discussions on ways blockchain technology can be applied to various organizational procedures and processes, but librarians have not been evidenced in these mainstream discussions. However, the use of blockchain technology in libraries is on the radar of many information professionals who are curious about or understand its disruptive potential.

Drs. Sandy Hirsh and Sue Alman of the San José State University School of Information, were awarded a grant from the Institute of Museum and Library Services to investigate blockchain technology in order to gain a better understanding of the ways blockchain applications could be implemented in libraries to better serve their communities. Technology experts representing libraries, blockchain development and urban planning were selected to address the issues surrounding blockchain applications within the information professions.  These experts participated in each of the three projects that were developed with the IMLS grant funding:

The presentations and discussions focused on the need for the profession to consider many issues that impact blockchain implementation in libraries.  The complex issues of developing standards, understanding the legal ramifications, and establishing security protocols are detailed on the SJSU iSchool blockchain website and will be expanded in the forthcoming book of the ALA Library Futures Series, Blockchain, available in spring 2019.

However, librarians must engage in serious dialogs within our profession and with other blockchain developers and users to make sound decisions for the future. One of the first steps is to ensure that our current professionals and students have an accurate understanding of how blockchain works and the benefits that can be derived from its use in libraries.

Several blockchain applications or use cases that have the most practical and immediate impact are: ILL for fee management using the voucher model with crypto currency for micro payments across libraries; credentialing/badges for self-sovereign identity; community-based collections that extend library-like services for sharing objects, tools, expertise; and securing ways to track digital provenance.

The experts’ executive summaries provide a rich context for possible applications of blockchain technologies in libraries.  Two of LITA President Bohyun Kim’s suggestions encouraged the profession to consider the kind of data and records that need to be stored and preserved exactly the way they were created and the implementation costs.  John Bracken, DPLA executive director, suggested that the profession explore the ways that blockchain could be used to archive social media and the documentation and evaluation of news.

The discussions led the experts to agree on several major recommendations for moving forward:

Currently we are identifying 2-3 micro-projects  for testing in order to move from awareness to activity or proof-of-concept to full implementation.  Three of the micro-projects identified are:

Ideas for other micro-projects and suggestions for potential funders should be sent to: susan.alman@sjsu.edu

You can take the conversation on the road or prepare for the blockchain revolution with some professional development at any number of tech and blockchain-themed conferences happening throughout the U.S. and worldwide. The following are just a few past and future conferences to be aware of for those who plan to delve deeper into the subject.

Library 2.018 – Recordings of the Blockchain Applied: Impact on the Information Profession June 7, 2018 available on YouTube.

Beyond Bitcoin: What is Blockchain and What Will It Mean for Law Librarians? November 2017, Online