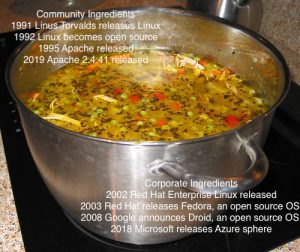 Le Central in San Francisco has kept the same stew going for over 40 years.  A perpetual stew or soup is something from the era before refrigeration, constantly kept warm, never completely emptied and with new ingredients added to fill the pot.

So it is with the Linux kernel.  It was released in 1991.  Since then, there has always been something new.  It mixes with the old and keeps on simmering.

The simplified timeline shows how Linux has evolved and continues to evolve.  I picture two hands, one corporate and one community, putting in ingredients to keep the pot full.

Blockchain might evolve similarly.  It began as an academic paper and cryptocurrency, away from any organized structure.  Since then, it has been used by community organizations, along with corporations like Wells Fargo.  Progress is happening in more places, all at the same time.

“One Big Pot of Chichen Soup” by sierravalleygirl is licensed under CC BY-NC 2.0

So far, I have been unable to find an identity that works on multiple networks.  Please comment if you have. In the […]

Satoshi Nakamoto outlined the basis of Blockchain and subsequently bitcoin with the above quote in his 2008 paper.   The paper also anticipated […]

Please post questions, comments, and suggestions here for anything related to: Understanding blockchain technology Individuals/organizations that should be represented at the national […]